The summit of Rocky Butte is, as I may have mentioned, Joseph Wood Hill Park. You get to the top by finding NE Rocky Butte Road off NE 92nd Avenue between Brazee and Russell Streets, or take NE Fremont St east from 82nd and follow it around the City Bible College (which was once the Hill Military Academy, the namesake of the same man who the park was named after).
Once at the top the road goes around what appears to be a crenelation at the absolute summit: that is the centerpiece of Joseph Wood Hill Park, and where these views I've been sharing can be obtained. Now, during these pandemic seasons, the part of the loop that faces east has been closed, one presumes to prevent too many people from clustering into an ongoing superspreader event. But the park is still accessible, parking now being somewhat limited.
If you do go, mask up.
Once within the limits of the crenelation, there is an absolute flat area with wide red-pumice paths and an old airway beacon (which is lit and rotates at night) and unparalleled views of outer eastside Portland, and a view of Wy'east only exceeded by that of the Johnsrud viewpoint near Sandy. The rock walls and seating niches are immensely charming. And the lamps on the stone pylons? Incomparable.
They even frame Luuit/Mt St Helens magnificently. 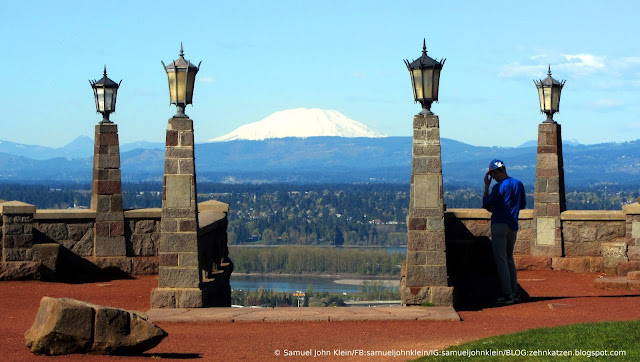 This is also a way you can see a lot of IKEA without actually going. Still, It's calendar-worthy.
Designed by: Samuel John Klein at 10:23