The Hull Of Norm Thompson

Throwback for the day, year 2007, number two.
Norm Thompson. An escape from the ordinary. Sold outdoorsy stuff to upscale shoppers; kind of like an L.L. Bean, only Oregonized. Local until the times changed and it got sold to a big company which sold it to a bigger company which relocated it piece by piece to the east coast until now it's just like Henry Wienhard's and Rainier Beer and Steinfield's and Nalley's: historically Oregon brands that are just some nameplate to be sold back and forth.
At the time the majority of the company was still here in Oregon but its landmark main store, which was for a very long time on NW Thurman between 18th and 19th Avenues, was left behind as Norm consolidated its operations out in the Tanasbourne area of Hillsboro along Aloclek Drive.
It had been vacant at this point for some years ... remember, the wave of money and building hadn't gotten as far north as Thurman Street yet, in 2007. And when Norm Thompson left for Hillsboro, in 1995 or so, it took the veneer of the old building along with it, revealing the work that it covered. 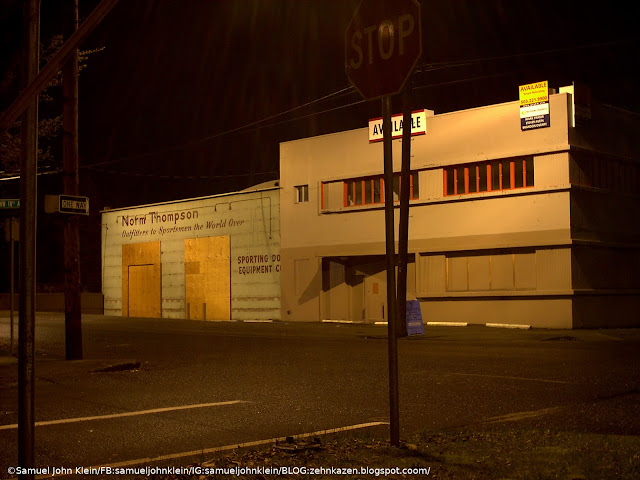 Now, it's just ordinary.
Designed by: Samuel John Klein at 11:51