1259. I just realized I had a Channel Surfing chapter of the 10's up and I've not posted it. Bad me! So, without further ado, here we go.

Wichita's channel 10, KAKE, is on your side. When I was a kid, if you had cake on your side, you were a messy eater due for the bath (and maybe with a cuff on the head)...

And now, Channel 10, Goodland KS. KBSL ... nothing much original here. Coverage you can count on, familiar sliver-crescent that looks more like a bowshock with the little flare of light along it. I guess that CBS eye also doubles as a navigational deflector ...

Next we have KENV, Channel 10, Elko NV. Yeah, I know ... I thought a place like Elko was too small to have a station, but it does. It, like many micro-market stations, provide entertainment by broadcasting an adjacent large-market station's content (in this case the feed is from Reno's KRNV Channel 4). It bills itself as the only local station serving northeastern Nevada, and we believe them at that. But thier "little engine that could" newscast really won me over with its heart and charm.

How small is KENV? I never noticed any reporters, as such – the people being interviewed usually held their own mikes. Looks like the news photog was the only person in the remote crew. You can view thier entire newscast at the KENV home page here, but be warned ... the volume is a little loud.

Next, we have KFDA Channel 10, Amarillo – burly 10 filling the frame, CBS eye completing the square by pinning down the corner. This works well. And they're channeling news with a burshed-metal sheen:

KGTV is SanDiego's NBC, Channel 10, who hides the call under a bushel as so many do. But they do bring the sun motif, which is in character for a Pacific coast city at that latitude, into the design very well. Dynamic tension is provided by allowing the 10 to touch the side of the circle, opening it up:

Down in hurricane country, KLFY, Lafayette, LA, embraces the whirlwind with a logo that looks derived from the meterological symbol for them:

KMOT, Channel 10, Minot ND, serves Williston on satellite channel 8. The similar logo treatments are another example of consistent branding. The obliqued numerals and the off-center parallellogram are playfula and energetic: 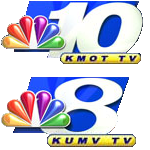 KTMF, Channel 10, Helena MT is being included here because it's Channel 10 ... definitely not due to its design-free logo (Couldn't they have made it Helena's The CW? Couldn't afford an apostrophe-s? What? And apparently they used up the design budget before all the letters in HELENA were properly kerned):

KOLN 10, Lincoln, co-brands with KGIN, 11, Grand Island NE, for a cool unified logo that also reaps the whirlwind (though being Nebraska, we're thinking tornado instead of hurricane):

KOLR, channel 10 Springfield MO, depends on the heavily obliqued bold type to get the impression of energy across, and blue and gold never go out of style:

KSAZ, Phoenix's FOX station, gets points for making the zero in the 10 look just like the O in FOX, which unifies the design. However, since I've said before I hate that zero/O, I take the points back, making it a wash.

KTEN has the luck of having the best call sign a channel 10 could have. Serving the mythical land of Texoma with a brushed-metal dominance, the two glyphs merge into one:

The flat color on the peacock tail feathers (in the coverage you can count on position) is interesting; mostly stations tend to give them a highlight to make them look 3D.

KTTC, Rochester NY, hides its channel number rather than its call:

I enjoy KTVL, Medford OR's, logo. It works on a level that's a little hard to put into words, but the interplay of shape and color just are nicely done here – as is aligning the CBS eye to the crook in the shoulder of the 1, and the use of Eurostile:

KTWX, Waco, TX, presents two eternal Texas verities; the red-white-blue color scheme, and the Lone Star. The two numerics are merged into one shape, and the star stands smartly at the center of the circle:

KXTV, Sacramento, doesn't make use of the cool call sign with the X (for 10) in the middle. It does have a pretty decent treatment, though, with the businesslike letterforms:

The backwards barb on the underline is an interesting visual reinforcement.

KZTV brings Action News to Corpus Christi with cool blue and metallic type all nailed down with the eye in the middle: 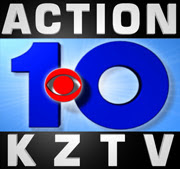 WALA, Mobile AL, gets originality points for making the channel number a fully-minuscule "ten" which has the audacity to sidle up against the "you will be assimilated" FOX logo. Like many FOX stations, though, the call is absent ... and when you have a fun one like WALA, that's just unfair:

Albany, GA, gave us the musical group REM and a whole musical school which emanated from there through the 90's. Something about the 10 in the logo seems to make sense with the musical sensibility down in those parts:

Coverage you can count on provided courtesy of the Peacock, of course.

WAVY, Channel 10, Norfolk VA doesn't display its call sign. It doesn't have to. This is brilliant work ... the way the design is unified by the eye completing the wave shape:

WBIR TV, channel 10, Knoxville TN, does a clever thing with the heart that connects the 1 and the 0. Their slogan happens to be Straight From the Heart ...

The logo of Channel 10, WBUP, Ishpeming MI (on the Upper Peninsula) look very DIY, but they work. I'd not oblique the call if it's going to live in the same circle as the number though. And if I ever get rich and famous, I'm giving $100 to the best non-serious explanation of what an Ishpeming could be (other that what it really is, some native American word for something or other):

WCAU, Philadelphia, brands itself as NBC 10 ... the logo is a simple thing, notable because they use Copperplate for the letters NBC rather than the house style:

On the Iron Range, it's WDIO and its sister WIRT serving Duluth and Hibbing, MN. They too combine thier numbers into a distinctive look that works hand in globe with the ABC logo (and I enjoy the whimsy with the curvy slash)

WHEC, Rochester, NY: News on the vertical, 10 on the horizonal. This adapts no doubt very well to mic flags, demonstrating appropriatenss of application:

WILX, Lansing MI's Channel 10, has a logo that works as a jacket patch:

WIS, channel 10, Columbia SC – we've seen this "knocked-out" 10 elsewhere, but this is a different take on it, with no obliquing and 3D shading that I find kind of funky:

WJAR, Providence RI, has the same design as Philly's WCAU:

WKNO, Channel 10, Memphis, is eductional ("W-Know") and does us the dignity of including the channel number:

I enjoy the "raster-scan" lines there. Nice touch.

WTAJ, Altoona PA, has a very cool look ... the grooved parallelogram, the unexpected and cool detailing in the numerals bringing it very much alive:

WTEN, Albany, NY, also plays it straight though the green and yellow color scheme is more of what I'd expect of a sports team rather than a news team:

WTHI, Terre Haute IN, has a type style that looks the same but does a cool cut-out parallelogram thing with the 10 which I enjoy (and gives the eye a place to be):

WTSP, Tampa, does a WAVY-type thing, in that a water-reference is used well (not as cool as WAVY, but well done ... nothing personal, WTSP, but nobody can out-wave WAVY):

And lastly, WWTV, Channel 9, serves the eastern Upper and Northern Lower Peninsulas of Michigan from Cadillac, and has a satellite station WWUP to cover its market, which is reputed to be the largest market in area in the US:

Join us next time on Channel Surfing, where one and one will make eleven. Take us out, baker man:

i love this series of posts
great job

Skookum of you for sayin'.

I loves me the logos and I love going on about them, but if someone else is enjoying it too, that's even better.