Some time ago I uploaded Silverton photeaux with the aim of showing off the street blades in My Little Town™. I realized that I never quite got to that. Herewith ... 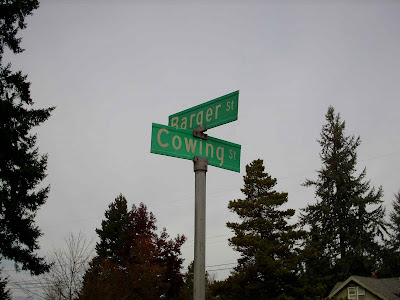 I give you here your typical pair of Silvertonian street blades. Silverton, as many towns do, name streets after the families of the settlers who originally populated the town. Barger and Cowing are two such family names.

As seems appropriate for a town of Silverton's size, the street blades are uncomplicated. They show a designers' sense of hierarchy; the specific (street name) stands out, the generic (street type) is diminished. Information processing is limited to what the driver quickly needs to digest. Also notably is the mixed-case, which, when the sign went up, some time in the 1970's, was something of an innovation. There is now a school of thought that holds that the brain processes not only the shapes of the glyphs but the overall shape of the word – which, if correct, suggest that a mixed-case word of clear glyphs packs more informational punch.

The typeface is a recogizable FHWA version.

This corner is in one of the most charming neighborhoods that one could imagine, south of downtown and between the South Water Street arterial (the road to Silver Falls State Park) and Silver Creek. Looking south down Cowing from Barger, here's what you see: 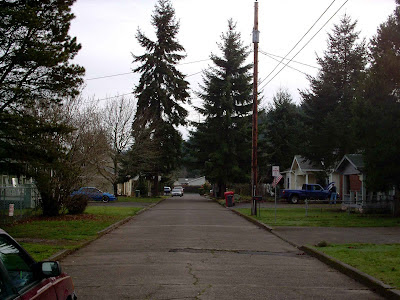 This is charming enough to make an hold hard-hearted former Silvertonian like me consider moving back some day.

Next we have a street blade set from one of Silverton's hidden corners. You won't find Fourth Street on most maps, but it exists. thou there's not much of it: 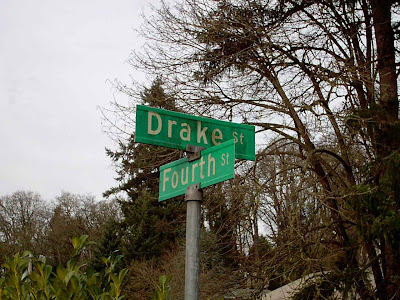 This is looking north on Fourth from Drake: 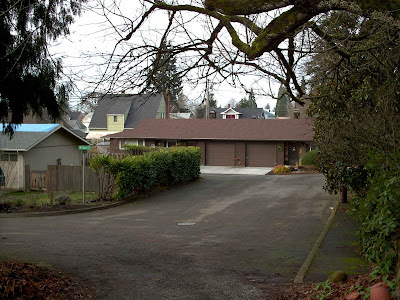 There is, by the by, just out of shot on the right, this big gorgeous house that overlooks that asphalt sidewalk. You can see it quite plainly if you look up Drake Street from South Third (it's a rather short block).

And this is south on Fourth from Drake: 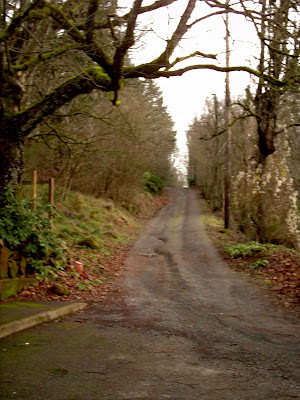 Up there at the top of the hill, according to maps, Fourth doubles back and becomes Fifth. I didn't have the nerve to walk up there though: it looks a little bit private even though it's a public right-of-way, and I didn't want to make the people up there look like I'm doing surveillance. If there's a sign for the corner of Fourth and Fifth, we'll have to find that another day.

Next, here's an example of a downtown blade, from First (properly, N. First) and High 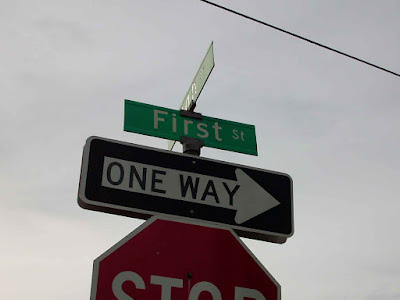 The blocks defined by First, Water, Main, and Oak are a historic district now, with attendant signage: 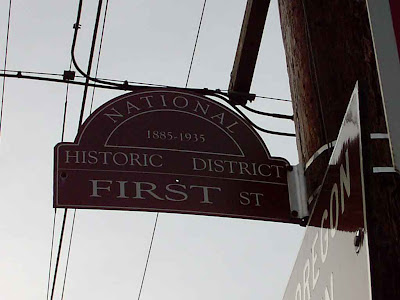 While the brown color and the distinctive and refined serif type here communicate charming antiquity, the e-x-t-e-n-d-i-n-g of the type in the word FIRST by stretching it out makes me cry a little and die a little inside.

And this is what a numerical street outside of downtown looks like. Note the directional, in the same case and size as the generic. 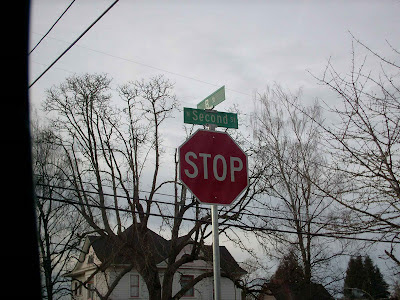 And Portland isn't the only place you'll find a Stark Street ... there's also one just east of the above picture, along B Street between N. Second and N. Third. 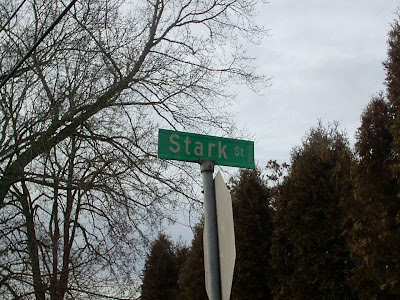 I am really burning the time here. Up against the clock, got to go. More later.