1222. As part of this blog's urban design commentary series, we decided to go topical with a look at the layout of Pakistan's capital city, Islamabad.

The city is located in the country's far north, near (or very near, depending on whose interpretation of Pakistani territorial limits you respect) the country's border with India. It is immediately adjacent to another major Pakistani city, Rawalpindi – notable as the home base of the Pakistanti General Military Staff. For a great deal of Pakistan's modern history, the city of Karachi – located next to the Indus River delta, and still by far Pakistan's largest city, served as the country's capital. Sometime during the 1960's, though, it was felt that Karachi no longer was the ideal place for Pakistan's leadership. Not only was it old and crowded, it was vulnerable to attack from the sea, and probably held a disproportionate share of national capital development.

As other countries who established new-era capital cities during that time, most notably Brazil's Brasilia and Australia's Canberra, the developing authorities chose to order and plan the city for present order and to channel future growth into desirable (or at least controllable) patterns. The city of Islamabad was thus organized on a rectilinear grid (map below nicked from this site): 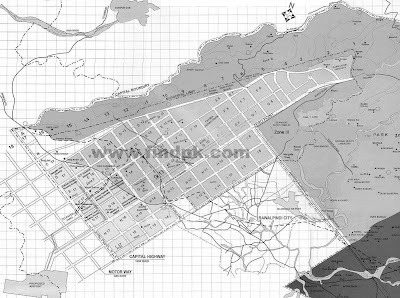 Clicky to embiggen. A remarkable feature of the plan can be seen in the notations that emblazon each block: each is identified by a letter-number combination, the letters going from A at the northernmost extremity of the planned urban area and 1 at the farthest east tip, and increasing south and west). Each block is locally known as a sector.

Here, nicked from Islamabad's Capital Development Authority map (click here to go to the main city guide; click on the area labeled "Zone I" to gain access to the residential-commercial sections), is a map of Sector G-10:

Here yet another level of structure reveals itself: each sector is divided into four quarter-sectors, labeled G-10/1, G-10/2, G-10/3, and G-10/4. While the rationale for each sector is the same they are not identical; the quarter-sectors in one sector will not be the same size and shape as those in the next sector. Also notable is the provision of a commercial area in each sector (here noted as Markaz G-10). Reviewing the maps shows that every developed sector has one, typically in the middle (though some have them along one edge). We suspect the interior numbered streets are probably numbered in order of planning or construction. We daresay that the structure of curved and straight streets distributed within each sector reminds one of the layout of some suburban areas of American cities.

The level of planning and order has one more layer; the capital territory area withal is divided into five Zones. Zone I contains commercial, business, residential and national government; Zone II appears to be devoted to heavy industry; Zones III, IV, and V appear to be devoted to either natural open space, more planned housing development, or a mixture (Zone III seems to be strictly natural open space).

It must also be said that a totally-designed city plan is nothing new for national capitals. Even our own capital city, Washington DC, was built on a strict plan that was as much about designing a city as a single unit as it is about keeping things in thier proper places.

Email ThisBlogThis!Share to TwitterShare to FacebookShare to Pinterest
Filed Under: city planning, The Grid, urban design